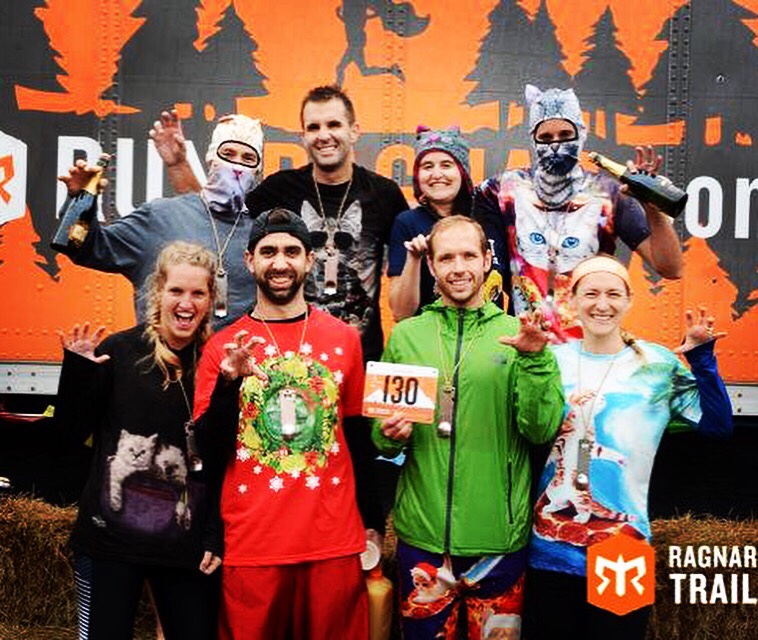 Merry Christmas readers! 🎅🏻🎁🎄It’s been a very busy few weeks in preparation for the holidays. Now that presents have been exchanged over long FaceTime sessions with family, home-cooked dinners have been enjoyed, sugary Christmas cookies in the shapes of trees and bells have been devoured, Christmas Vacation has been watched, board games have been played (someone in our house is a Yahtzee champ🙋🏻‍♀️), and cocktails have been drunk, it’s time to finally share my stories from Ragnar (remember that trail race I had been training for all fall?)!

Several months ago, my brother Matt, a Florida resident, invited me to run on his 8 person Ragnar team at Alafia River State Park just outside of Tampa, Florida in early December. Camping AND trail running?! Two of my favorite things, how could I turn that down?! I had heard of Ragnar races before. In fact, Matt and his friends had run the Miami to Key West Ragnar relay road race a year prior. It sounded like a lot of fun and I’m always down for a challenge. I had no idea what to really expect though.

I thought maybe I was packing a little too much for a two day camping/trail running trip, but turns out, I used/wore almost everything! We had one afternoon of hot temps with super sweaty humidity, a scary nighttime lightning storm, torrential downpours, and a morning of unseasonably cold Florida weather all in a 48 hour period. (No, my doggie in the pic was not packed😉)

A cool aerial shot that I did not take (thanks internet) of Ragnar village and what I called, “tent city”. 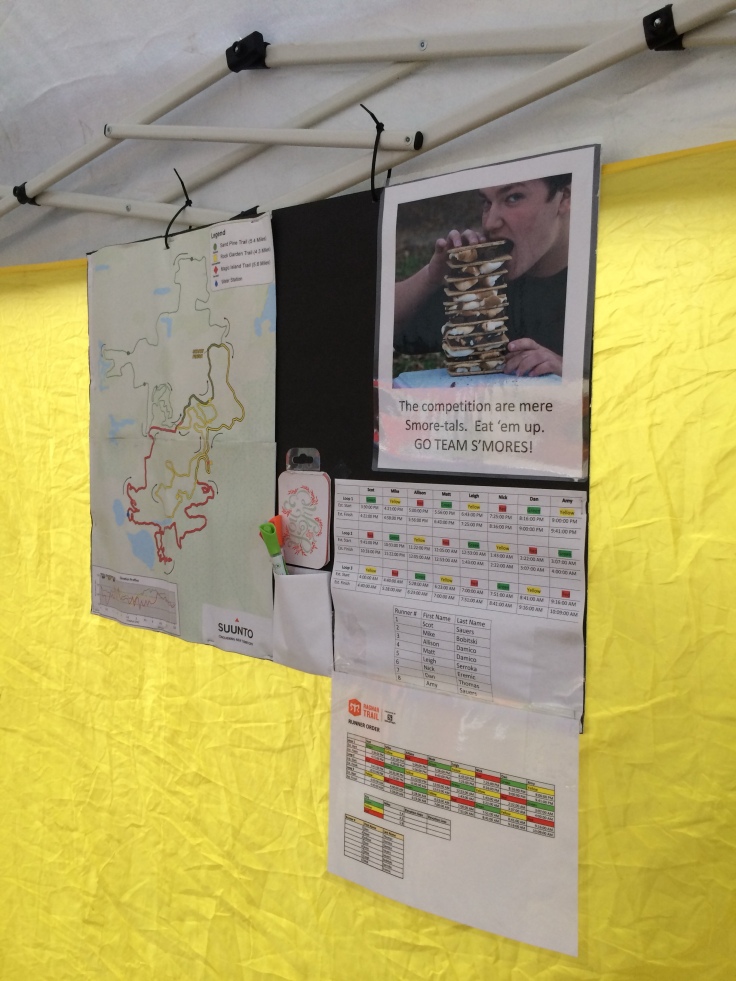 Our team captain, Scot, did a great job of keeping us organized as far as who was running what loop (there were 3 in varying difficulties) and approximately at what times. Shout out to Aaron for making our motivational poster 😉.

Hamming it up with Matt in our “team uniforms” the day before the race. Meow!

The gals of Team S’more Miles To Go: Amy, Leigh, and yours truly. 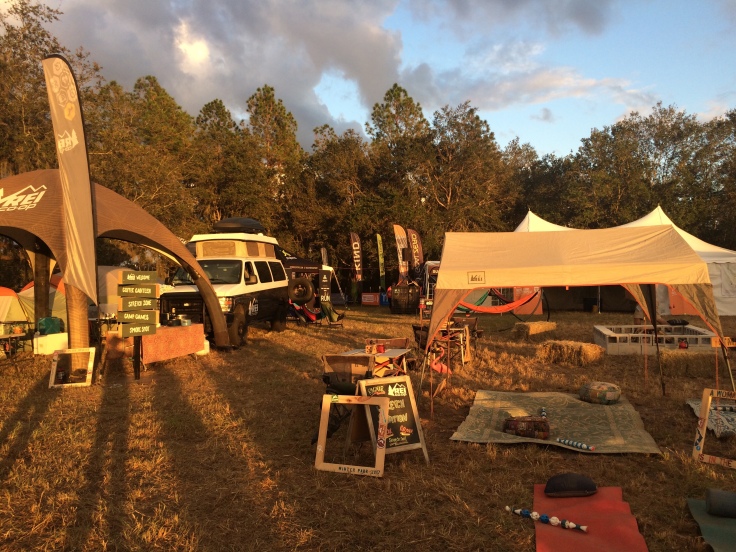 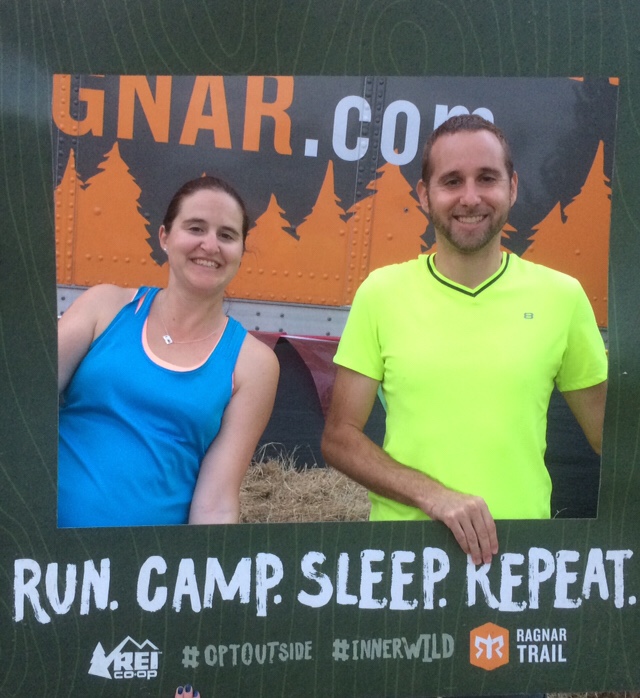 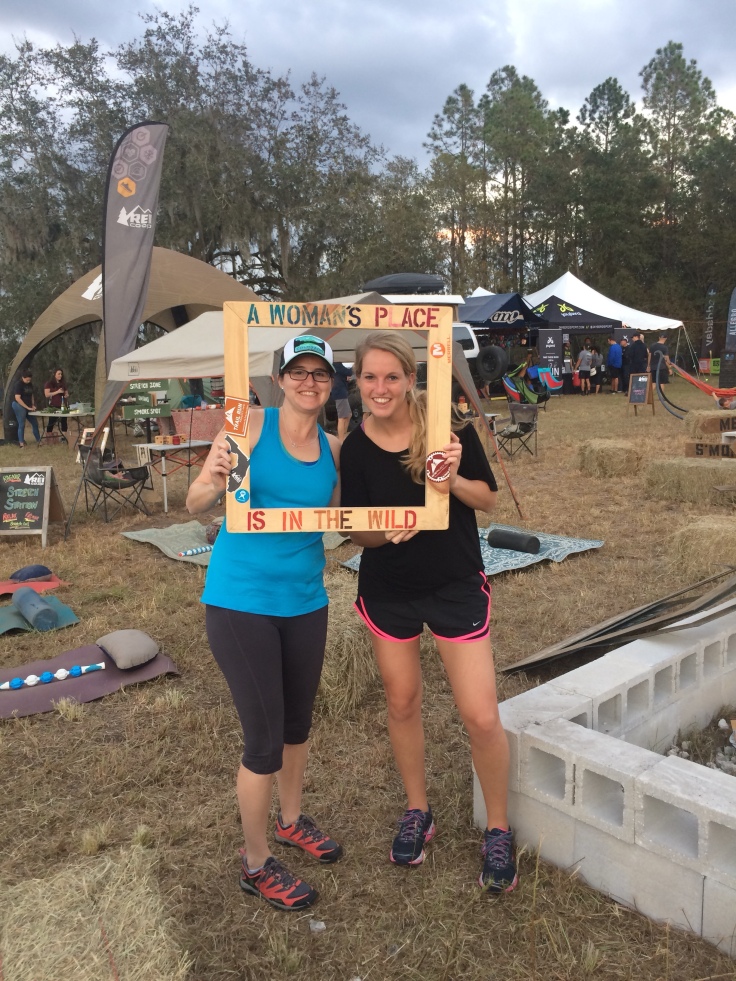 The big white tent is the transition tent where one runner starts, finishes, and then hands off to the next runner. 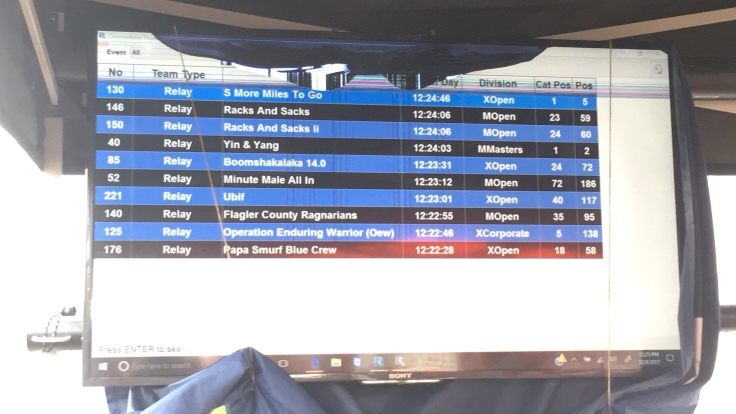 Very “techy”…you can see when your current team runner is close to finishing their leg and get the next runner in place for their leg. Well look at that…S’more Miles To Go is currently in 1st in their division 👍🏻

The very first Ragnar runners started at 9am (our team wasn’t scheduled to start until noon). I was very excited to cheer the other teams on at the starting line. You could feel the excitement and team spirit in the (damp and sticky) Florida air.

At noon sharp, we sent our first runner onto the course, our team captain, Scot! I give him a lot of credit. His first loop was in the heat of the day on the green loop, a 5.4 mile loop with open spaces and not a lot of shade. Big props also for his fun, green fashion choices for the green loop.

I was our team’s third runner out and the first on the Red Loop, the most difficult of the three loops. Red Loop is a 5.6 Trail that pretty much turns into a roller coaster of dips, dives, curves, high ups, and low downs about 2.5 miles in. Here are some cool pics that I borrowed from social media.

All of the Colorado trail run training could not have prepared me for how difficult the humidity would be to run in. The hills of the red loop were also a lot tougher than I had imagined. I was a lot slower than I had ever thought I would be and honestly, it was discouraging. To make matters worse, I had worn new shorts (that I had never run in before….rookie mistake) and had some seriously painful chafing going on in my inner legs. Ouch. Oh and the heat rash all over my legs. I’ll spare you all from the pic I took of it.

Despite my disappointing first leg, my absolute favorite part of the entire race is this moment pictured above! I’m making my final push to the finish to hand off to my waiting brother in the transition tent for his first leg. I have just struggled on my first loop, but my whole team was right there loudly and enthusiastically cheering for me! It was so awesome and I instantly felt so much better! Talk about team spirit. 😊

After my first tough run, and being uplifted by my team at the finish, I decided that I wanted to try and see as many of my teammates finishing as possible. This is my brother coming in from his first leg.

Even with 7 others teammates running before I was scheduled to run again, it went surprisingly quickly. My next leg, the 4.3 mile Yellow loop, was at night. I used a headlamp, on my head of course, and another one in my hand to easily direct light where I needed it. I actually felt really good on this run. The visibility was decent and the trail easy to navigate. I chatted with a couple of fellow runners on the trail too. Sorry, no pics. What are you going to see in the dark anyway? I gotta say though, it was a little creepy hearing all of the noises in the Florida swamp jungle but not being able to see what creature owned those noises. Maybe that is why I was able to run a little faster? Haha 🐢🐍🦎 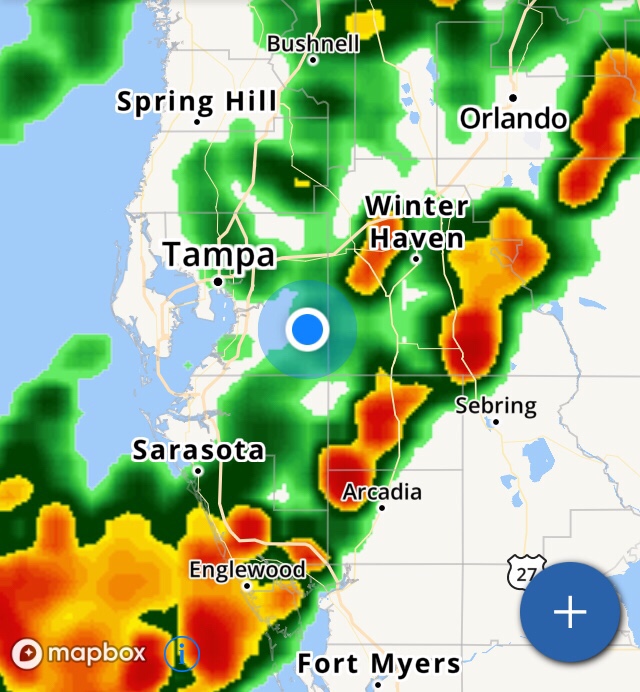 So after my run, I handed off to my brother for his next loop, the Red Loop, in the dark with the radar looking like this. Yikes! Yeah, it was pretty scary. The race organizers told all of us spectators to go back to our campsites and that they would make sure all of the runners currently on the course (like Matt) got back in safely.

This is a soaking wet Matt just after he safely made it back to our camp after completing his red loop. (He joked that the lightning actually helped light up the trail better) The race was suspended for about four hours until the storm passed. This ended up being a blessing for some of us because now it meant our third, and final loops, would be ran in the daylight. Plus, we all got a few hours of sleep. Thumbs up to REI for making awesome tents that can withstand unbelievable Florida downpours.

My final early morning loop, the green loop, was long, but pleasant. The weather had cooled quite a bit and there was a very light rain coming down making it much more comfortable to run in. The sand looked so much like snow, I just had to stop and snap a quick pic of this part of the trail.

The scenery was pretty awesome for a large section of this trail. The race organizers best described it as “a ribbon of white sand trail snaking through a sea of needle palms and moss covered trees”. It was stunning. 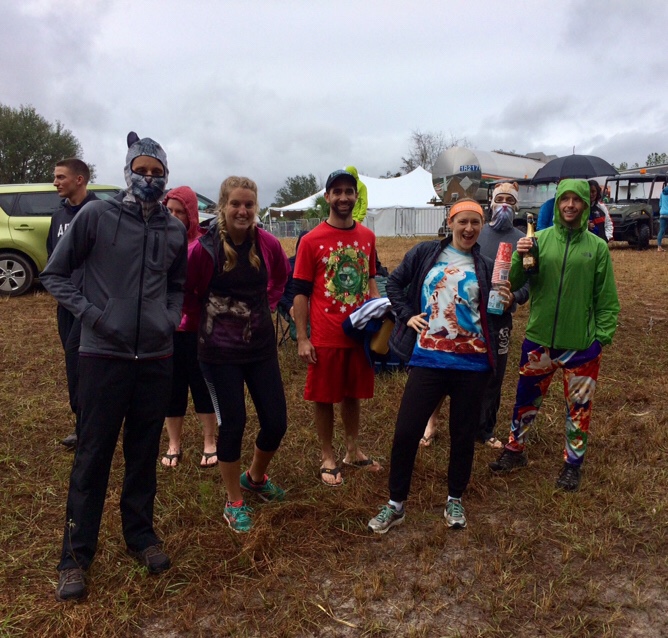 A couple of hours later S’more Miles To Go stood at the finish line in their kitty cat finest waiting for our final runner on the final loop, Mike.

Here Mike comes! With champagne in hand, our entire team joined him on the course and ran through the finish line as one.

And just like that, the memorable weekend of trail running, camping, laughing, eating, crazy weather, and fun was over.

Would I do it again? HELL YES! I am hooked on Ragnar Trail Races!

Here’s a few random pics from our Ragnar weekend. Enjoy!

CrossFit gym set up for anyone to use.

Each team had to provide one person to volunteer for a three hour window during the weekend. Scot passing out meal tickets and Ragnar tees to participants. 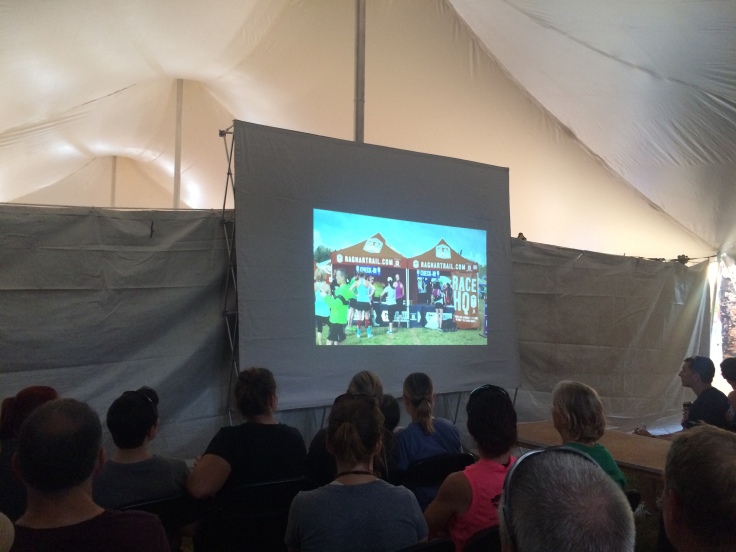 Watching the safety video before the start of the race. 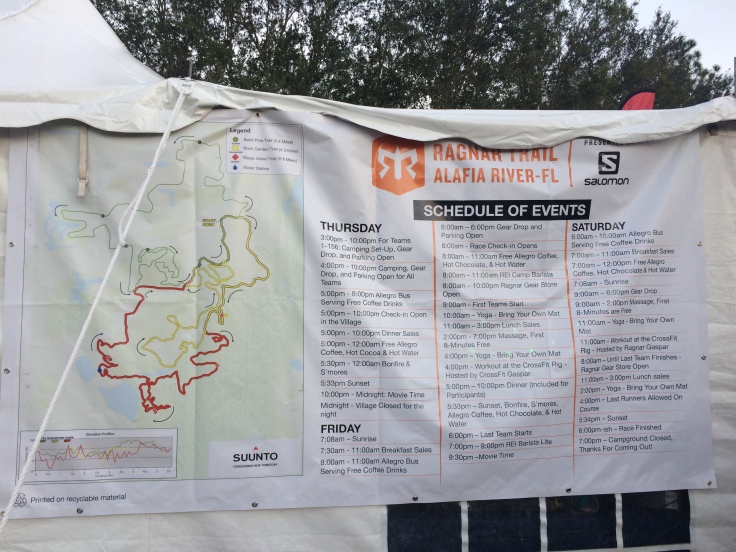 Lots of stuff to do besides running. 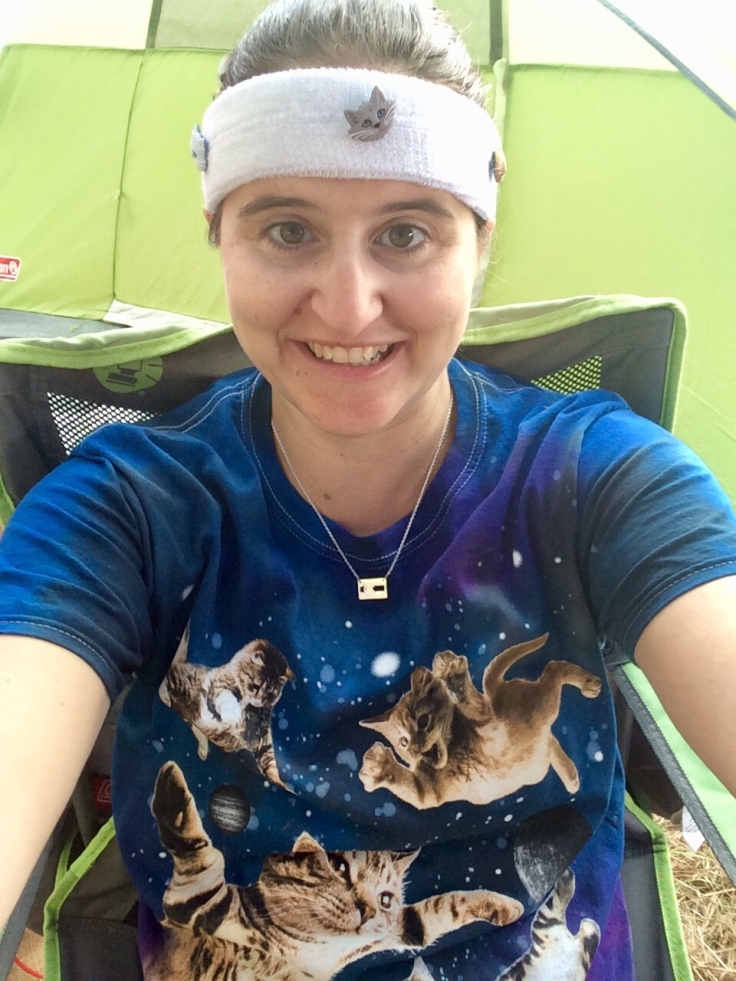 Yes, I made a cat headband special for Ragnar.

Soon to be Colorado residents, Scot and Amy. 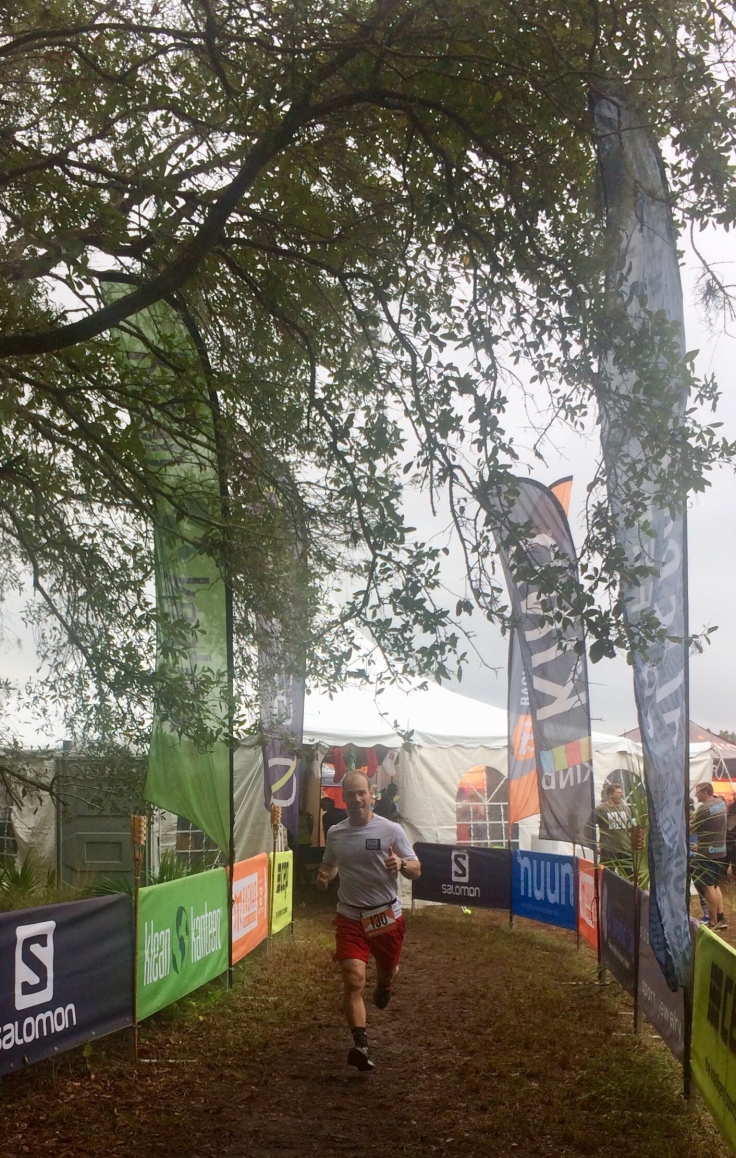 My beautiful sister-in-law, Nicole, and my future niece/nephew got to hang out at camp the first day. 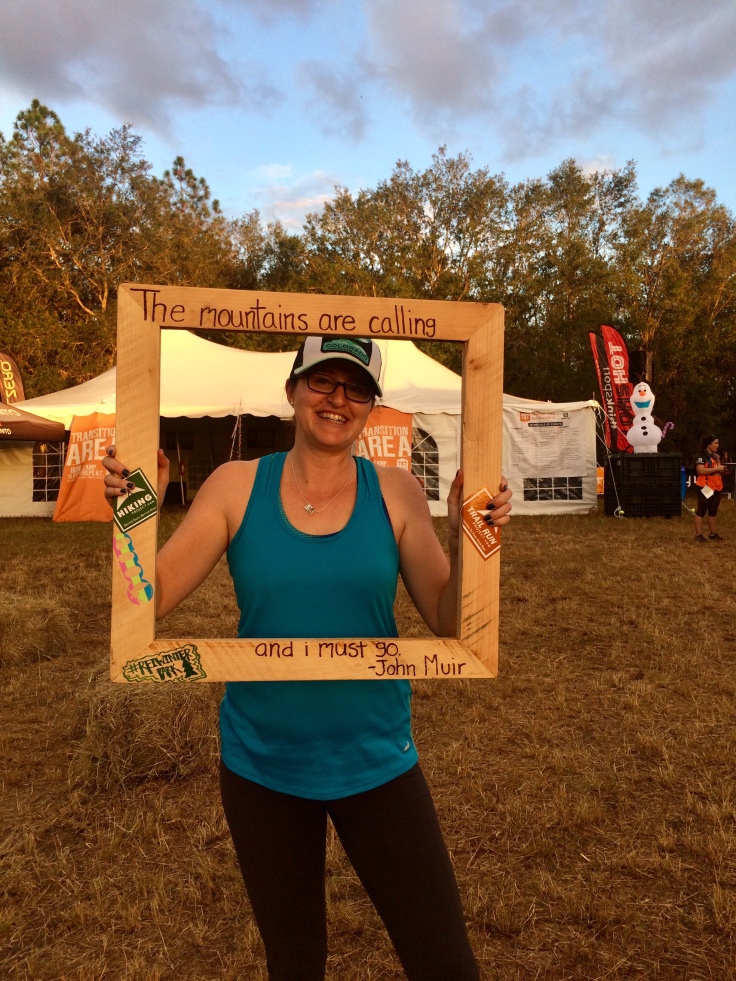 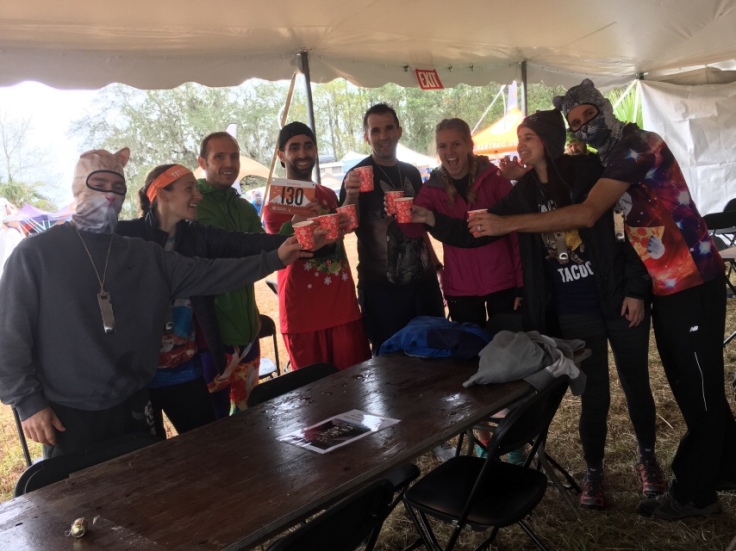 Cheers to an unbelievably fun weekend!